In Texas, the legal limit for Blood Alcohol Content (BAC) is 0.08.

Texas DWI laws start with Section 49.01of the Texas Penal Code and defines Intoxication as:

(A) not having the normal use of mental or physical faculties by reason of the introduction of alcohol, a controlled substance, a drug, a dangerous drug, a combination of two or more of those substances, or any other substance into the body; OR

(B) having an alcohol concentration of 0.08 or more.

Driving While Intoxicated in Texas is generally a misdemeanor criminal offense.  However, if your BAC is above 0.15, a DWI charge will be a Class A Misdemeanor.

A person commits the offense of Driving While Intoxicated if the person is intoxicated while operating a motor vehicle in a public place. DWI is a Class B Misdemeanor with a minimum confinement of 72 hours. If it is shown on the trial of an offense under this section that at the time of the offense the person operating the motor vehicle had an Open Container of alcohol in the person's immediate possession the offense is a Class B Misdemeanor with a minimum term of confinement of 6 Days.

If it is shown on the trial of an offense under this section that an analysis of a specimen of the person's blood, breath, or urine showed an alcohol concentration of 0.15 or more at the time the analysis was performed, the offense is a Class A Misdemeanor.

Driving While Intoxicated With Child Passenger

A first DWI is elevated from a Misdemeanor to a State Jail Felony if a child passenger (under the age of 15) is present in the vehicle.

A person commits an offense if: The person is intoxicated while operating a motor vehicle in a public place; and the vehicle being operated by the person is occupied by a passenger who is younger than 15 years of age. An offense under this section is a State Jail Felony.

State Jail Felony: Confinement in a State Jail for any term of not more than 2 years or less than 180 days; in addition to confinement, a fine not to exceed $10,000

3rd Degree: Imprisonment in the Texas Department of Criminal Justice for any term of not more than 10 years or less than 2 years. In addition to imprisonment, an individual adjudged guilty of a felony of the third degree may be punished by a fine not to exceed $10,000.

2nd Degree: Imprisonment in the Texas Department of Criminal Justice for any term of not more than 20 years or less than 2 years. In addition to imprisonment, an individual adjudged guilty of a felony of the second degree may be punished by a fine not to exceed $10,000.

1st Degree: Imprisonment in the Texas Department of Criminal Justice for life or for any term of not more than 99 years or less than 5 years.  In addition to imprisonment, an individual adjudged guilty of a felony of the first degree may be punished by a fine not to exceed $10,000.

What Is An ALR Hearing?

After a person is arrested for DWI, you have 15 days to request an Administrative License Revocation (ALR) hearing or your driver's license will be automatically suspended. When you request an ALR hearing a date for the hearing will be set about a month or two from the date of your arrest. At the ALR hearing, your DWI attorney will have the chance to cross-examine the police officers that were there at the scene. If the officers show up to the hearing, your DWI lawyer will have the chance to corner the police officers into a story that they cannot change later. If the police officers involved at the scene do not show up to the ALR hearing, your driver's license will not be suspended and you can keep your driver's license. You will not have to testify, or even attend, at the ALR hearing. Your DWI Criminal Defense attorney will be present at the hearing and do the talking on your behalf.

The SFSTs are made up of 3 individual tests:

During each Standardized Field Sobriety Test, the police officer looks for certain indicators or "Clues" that are added up to determine that you fail the tests. Each of the three tests have their own set of clues officers look for. 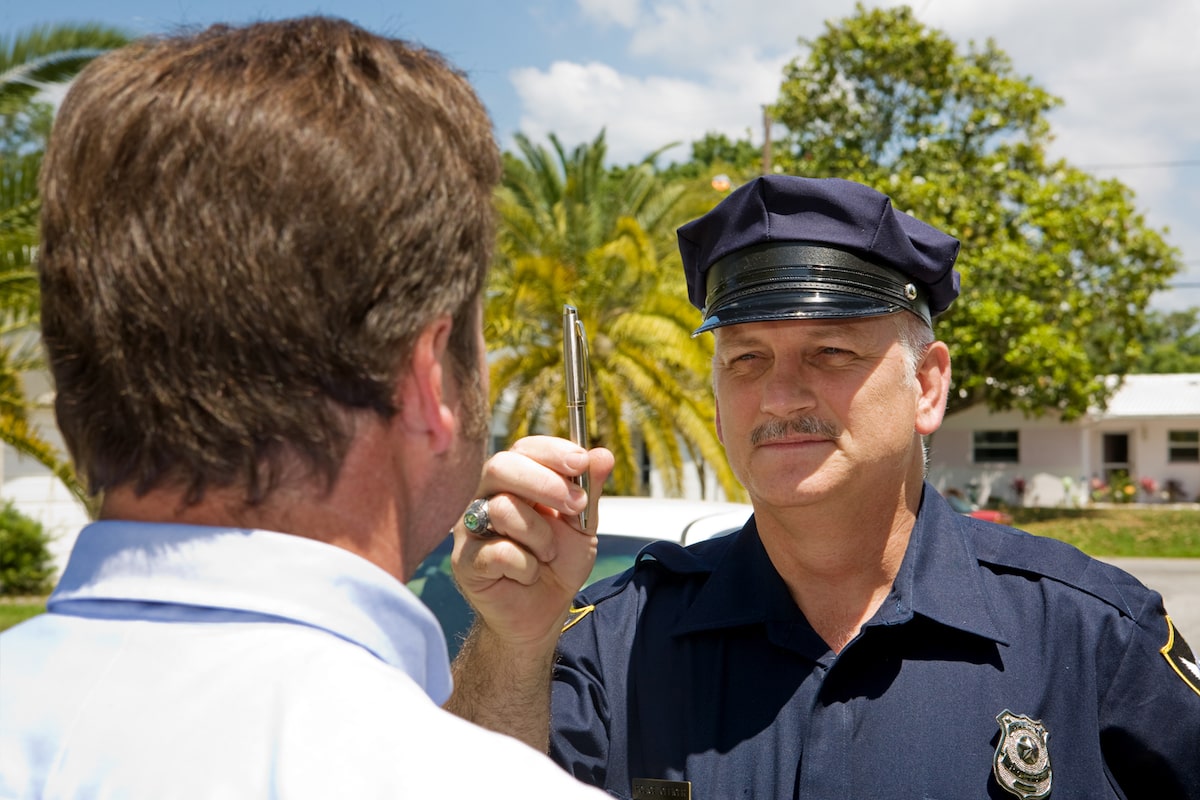 This is the one you see police giving that uses a pen or light that is moved horizontally back and forth. During the HGN test officers look for:

1. A Lack Of Smooth Pursuit: Officers look for your eyes to "jump" or "jerk" instead of smoothly moving left and right.

2. Distinct And Sustained Nystagmus At Maximum Deviation: When your eye is all the way left or right, officers look for Nystagmus or the jerking of the eye.

3. Onset of Nystagmus Prior To 45 Degrees: This clue is determined by whether the officer says they see your eye jerking, Nystagmus, before your eye gets to 45 degrees from looking straight.

There are a total of 6 clues in the HGN test, three for each eye.  It is very rare that officers say anything less than 6 out of 6 clues were present and there is typically no video recording that can actually see whether the Nystagmus was actually present or not.

The walk and turn test is the one we all commonly know as the "walking the line" test. In the walk and turn standardized field sobriety test there are 8 clues that officers look for to determine whether you might be intoxicated. Officers probably won't tell you that the test actually starts when they are giving the instructions or that there are two phases to the walk and turn test. Officers will instruct you to stand with one foot in front of the other, in a heel-to-toe fashion with your arms by your side while he gives you the rest of the instructions. 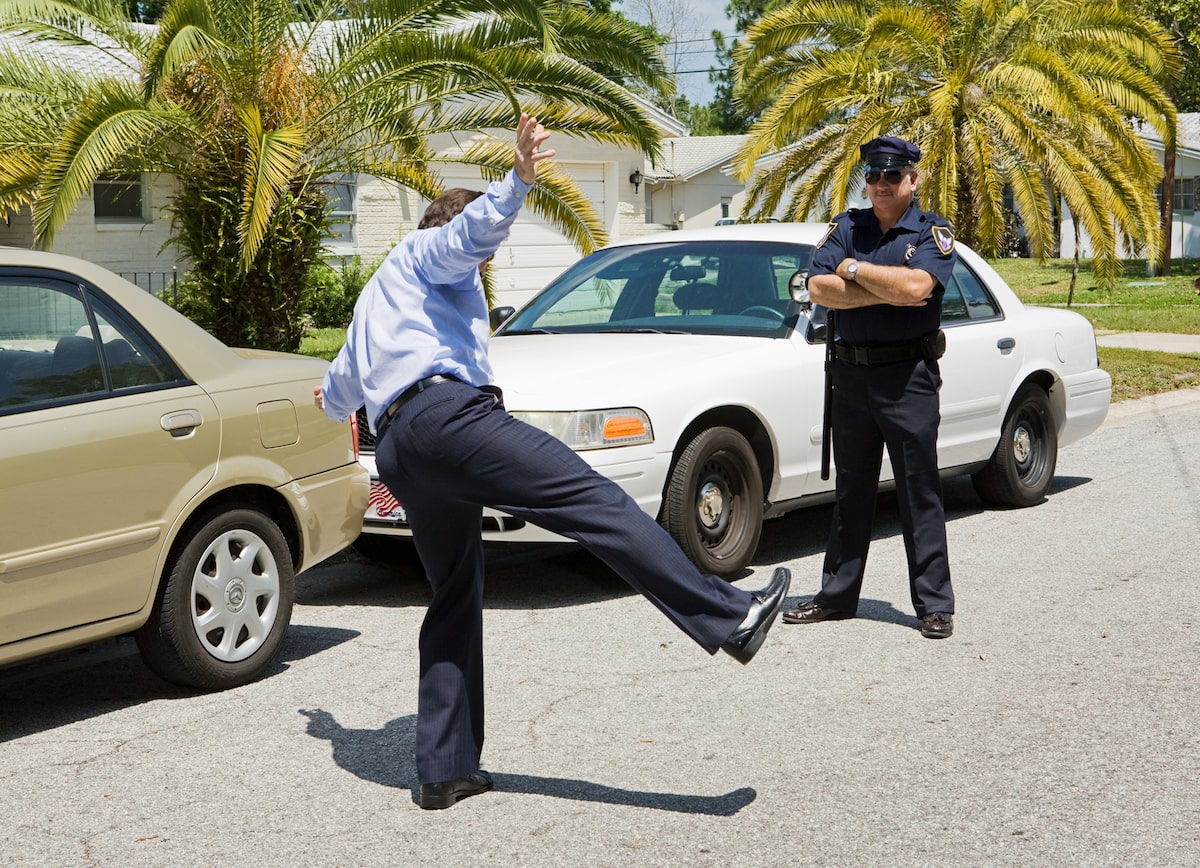 After the instructions are given, you will walk 9 heel to toe steps, turn with a series of small steps, and walk back 9 steps heel to toe. If the officer sees 2 out of the 8 clues, you fail.  Here are the 8 ways to fail:

8.  Takes the wrong number of steps

In this test, there are 4 clues the officers look for, but there are 13 individual instructions, that are given once, that must be remembered during the test or.....you guessed it...you fail.

The four clues are:

2. You didn't keep your arms down by your side

3. Hopping to maintain your balance

4. Put your foot on the ground

Is It Easy To Fail A Field Sobriety Test?

The answer to the question of whether it is easy to fail a field sobriety test depends on who you ask. Police officers are trained to tell you "No" and that if you are not intoxicated the tests should be very easy to pass.  However, we know these tests force people to stand awkwardly, hold their balance in an unnatural position, and walk "heel to toe" in a way that we don't normally walk. These SFSTs are not designed for you to breeze through, they are designed to be hard to pass and give officers more reason to justify arresting you and taking you to jail.